What to do if a dishwasher stops during the washing process and drains the water? – Let’s try to figure out the reasons. 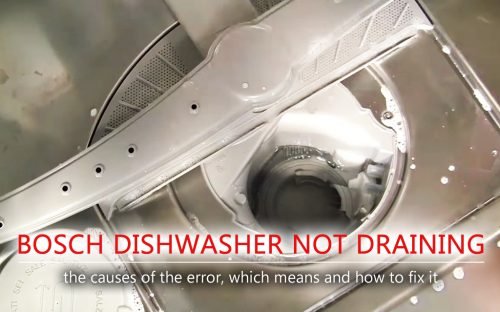 Briefly, there are two reasons – the drainage system is out of order or the control unit is defective.

The drainage system consists of a drain pump, a drain hose, a mesh filter, a drain filter and a drainage pipe. If there is a problem of any of these details, the water will not be drained. For example, it can be caused by the blockage of the drain filter, clogging of the grid filter, malfunction of the pump rotor – all this leads to the fact that the water can’t be drained.

What causes the problems with the drainage system?

There is a clogging formed during washing 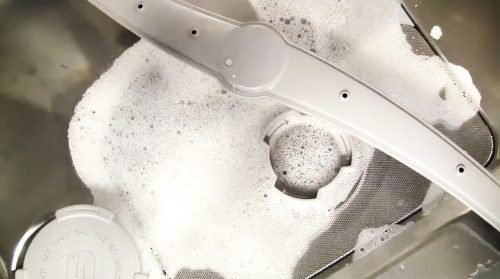 As a rule, it appears in two cases. On the one hand, the breakage occurs suddenly. On the other hand, the clogging is formed in a result of a long absence of preventive works on the drain filter cleaning.

Accidental occurrence of blockage was caused due to the foreign object entering the draining system. The remains of food and fragments of ceramic dishes are often the source of the trouble.

How to eliminate clogging in the dishwasher Bosch

The result of such clog can have certain consequences, such as the pump failure or rupture of the drainage pipe.

Why do any dishwasher operating instructions always recommend providing cleaning of the entire drainage system at least every six months? The fact is that unlike a washing machine, the dishwasher accumulates the remains of food and other fat deposits while washing dishes.

If you do not clean the drainage filter once in six months, you cannot avoid clogging. At a certain point, when the allowable threshold of contamination exceeds the permissible norm, the water won’t be drained.

It is very easy to prevent the occurrence of “deferred clogging”. Provide the drainage filter cleaning once a week or at least once a month.

The drain pump is out of order

The weakest part of the drain pump is the pump impeller. If there is anything other than water inside the pump, then breakages won’t be avoided. The reason is the low plane of the impeller. The pump impeller with 4 blades is used in dishwasher, and Bosch dishwashers are equipped with 9-blades pump impeller.

How to replace the drain pump in the dishwasher Bosch

Another problem with the dishwasher’s drain pump is the motor rotor, which failure can be caused by overheating. To avoid this, we recommend running no more than two washing cycles in a row without interruption. In addition, it is advisable to wait at least 30 minutes between each dishwasher’s start.

Follow the simplest operating rules to prevent breakdowns related to the pump.

A common problem is the loss of connection between these two components. When you press the “Start” button, the signal is immediately sent to the central processor on the electronic board. If there is no connection (for example, the power circuit problem), there will be no reaction.

Before the drain pump receives a target to start draining the water, the signal has to pass from the display board to the central processor. If there is no signal, the pump will not receive a command to drain the water.

This problem is solved by restoring the power circuit or replacing the broken capacitors of the control board. It is actual for all Bosch dishwashers’ models, including the legendary SRV and SMS.

Do you always have to call a repair center? Is it possible to solve the problem by yourself?

The knowledge of a specialist is not always required. As a rule, professional help is needed mainly in neglected situations, when it may be necessary to repair the control board or replace the drain pump.

In most cases, you can fix the problem related to the drain without any help. Such cases include:

All the above-mentioned types of blockages can be eliminated by yourself, without the use of any specialized tools.

If the water can’t be drained, and the display shows an unknown error code, we suggest you searching it on our website.