Having seen the e21 error code, we can confidently say that there are problems with the pump, although the type of the failure can be different. 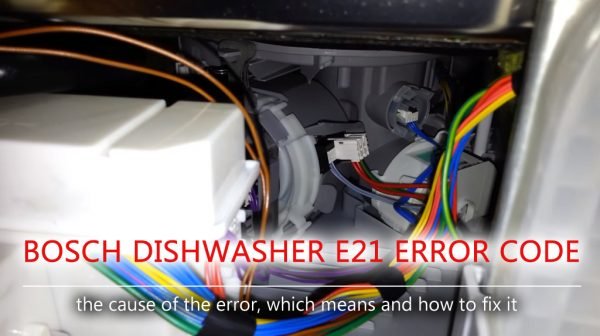 Why does the code appear?

The E21 error, having appeared on the display of the Bosch dishwasher, immediately paralyzes all the processes. The washing program stops, and the user is forced to put up with unwashed dishes and dirty water that can`t be drained.

So why does this code appear?

Often the difficulty with an impeller rotating appears when there are hair or threads wounding the detail.

It is important to remember that the E21 error appears in cases when the control module recognizes the pump and can control it, but due to a special algorithm, it understands that this part is not working in a proper way.

Let’s start with the blockages located next to the pump or inside the detail. Unfortunately, it’s impossible to get to the pump clog without disassembling the washer, but you can try cleaning the dustbin and then restart the kitchen appliance. It is quite possible that water, passing through a clean filter once again, will penetrate the more difficult clog. If this does not happen, you need to remove the pump, located on the body of the circulation module. After, you need to remove dirt from the niche in which the pump was installed. After cleaning and checking how the impeller rotates on the pump, you can collect the dishwasher.

After removing the pump, you can see that the impeller is very worn out and cannot perform its function. This is one of the most noticeable breakages because a broken impeller can be easily recognized due to its damaged blades. The impeller located on the pumps of the Bosch dishwashers is removable. So it is quite possible to change it.

Sometimes the impeller blades are not affected at all, but they are wrapped with a whole skein of some threads and hair mixed with compressed food remnants. Under such conditions, the impeller cannot work properly, so it must be cleaned. As soon as the cleaning is completed, safely collect the dishwasher and run it again.

Repair specialists note the lack of grease in modern pumps, or rather in its rotors. Poorly greased rotor begins to wedge and rotate badly after a while, which in turn causes the E21 error.

How to eliminate this breakdown?

Now you can put the “reanimated” pump in place and collect the dishwasher to check it in operation.